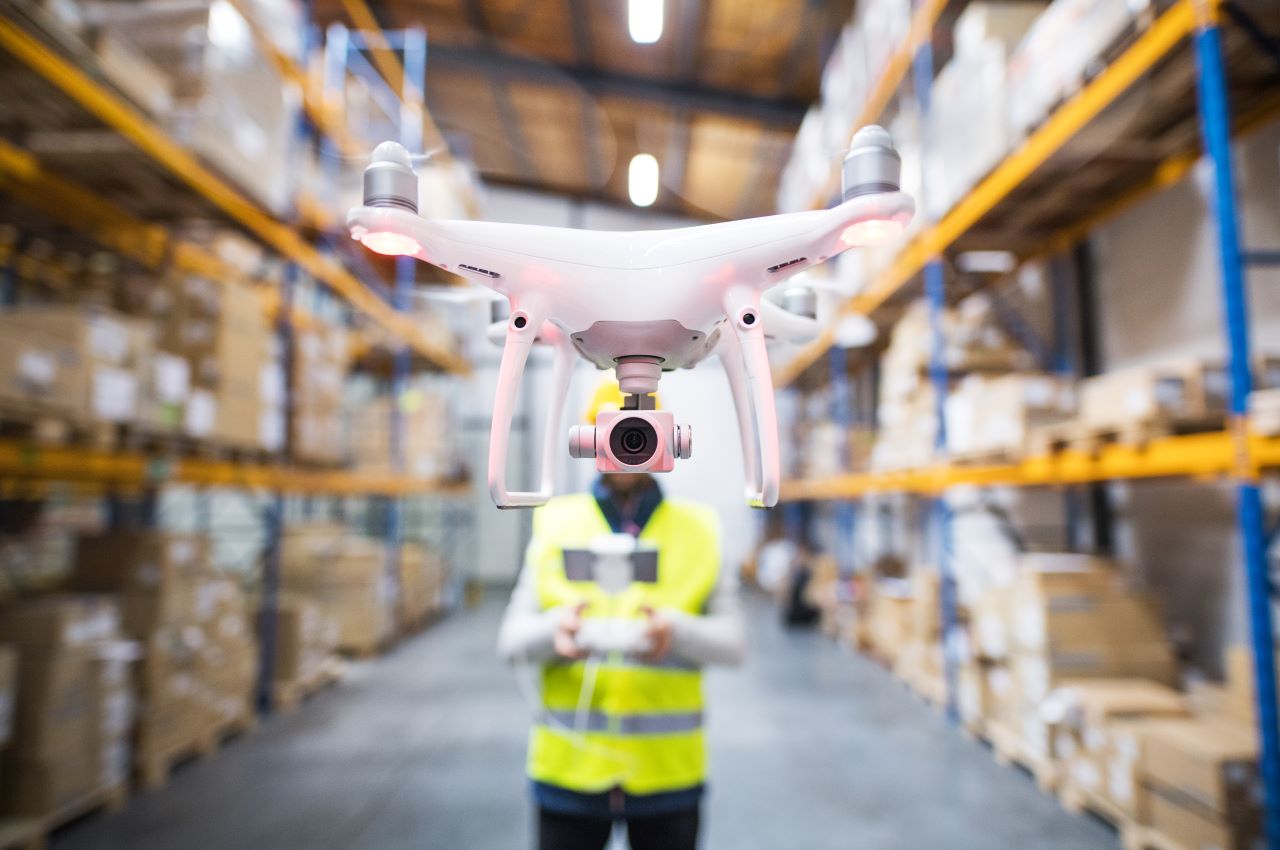 by JoeFlynn
in Technology
Comments

Warehousing & Drones Technology: Then, Now, and the Future

It is almost a decade since academic research, large companies, and tech startups showed early experimentation on the several applications of drones. For the supply chain industry, the multiple applications and use-cases have found relevance in areas like counting inventory, locating container trucks or warehouses, last-mile delivery for packages, and much more.

Drones Technology in Warehousing earned more recognition in 2015 when Amazon and Walmart made public its program for in-house drone systems. The strategic intention is the expansion of drone operations from Proof-Of-Concept plans into global deployments.

Since then, several innovations and startups have taken different angles towards proffering a better use of this innovation. With the changes, several thousands of drones are now flying outdoors, making planned deliveries and other special functions.

In reality, the use of drones offers a better approach to public safety, delivery, warehousing, and more. Also, autonomous drones are gaining more traction globally. Similarly, this segment shows more promise in the supply chain industry and is increasing actual business value for its indoor use-case like warehousing.

Regulations and Recognizing these drones in warehousing creates several prospects for the future. They sought to develop startups who seek to use solutions like RFID, WMS, and more to aid warehousing. Several ongoing projects and partnerships are working towards delivering detailed answers for the modern warehouse.

The use of drones in the warehouse would be functional in several operations. A typical rundown of flying robotic drones would perform tasks like counting boxes, inventory, and perform other standard logistics operations. Some of these operations include:

WMS can get full integration with a drone when data on inventory location can be accessed. To achieve this, drones with specific aisle, bin, or rack level. Drones can map out paths for optimal travel to aid stock location. Such drone can feature an optical system which combines machine learning and computer vision technology.

Drones can offer exact location arrival for stock. With drones, warehouse teams can measure how efficient this service works. While saving human personnel from having to track inventory, walk some distance, climb platform, and perform scans manually, drones can improve efficiency by covering all the tasks.

Drones can be optimized to visually inspects bar-code, labels, or use a variety of sensors to relay all inventory counts towards a central system. Scanning by drones can achieve a much faster time than the manual capture process. Also, in cases of discovering inventory shortage and tagging error, drones can deliver reports which would be helpful during analysis.

The Benefits of Warehousing & Drones Technology

The Benefits of Warehousing & Drones Technology as one system delivers so much more positively. Some key benefits include:

Challenges and Drawbacks of the Future

The management of drones and last-mile delivery are not entirely accepted or regulated yet. This shortcoming is due to airspace protocols and public safety concerns. Similar to automated and robotics systems, the present degree of performance can only highlight issues as it happens.

Even with the capability of collecting data accurately and swiftly, drone operations would still require that human touch to act on acquired data. In Warehousing, drones are set to ease the work process and make operations run more effectively.

As continuous innovation and investments continue to flow into drones and warehousing, new improvements continue to enter the work process of warehousing. A significant role that continues to witness more development is inventory counting. This role could become more efficient in the future.

A generation of drones that can effectively handle warehousing is becoming more likely. A typical example is a concept from Amazon is the conceptualization of Amazon Prime Air, a drone-based delivery system. Drones are a valuable asset for warehousing, and it can significantly enhance the overall inventory process.